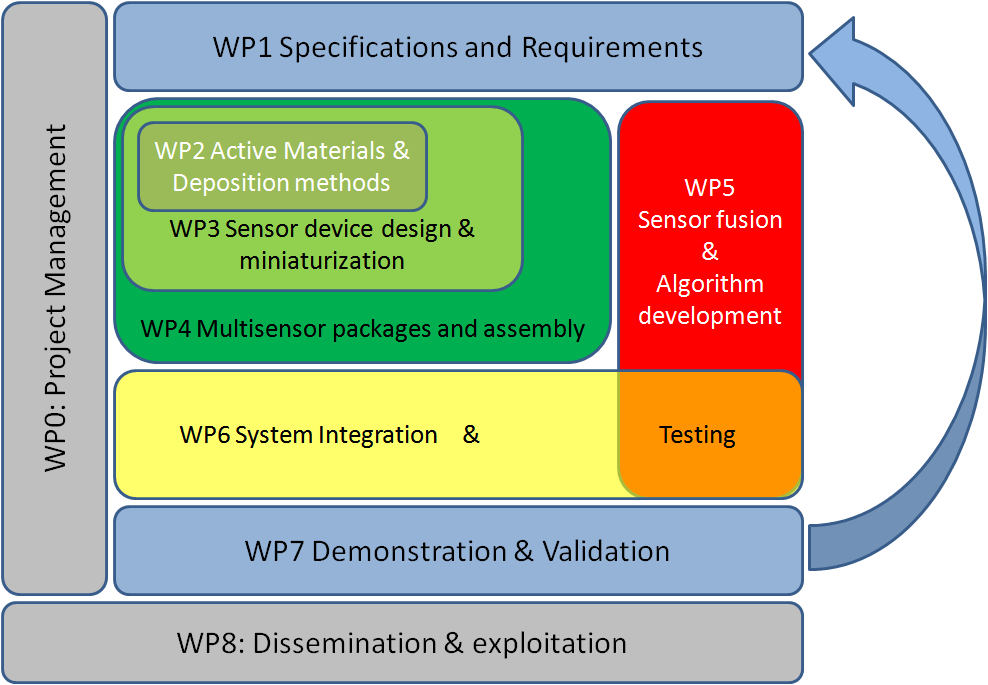 Project structure and the different work packages (WPs) of the SAFESENS project.

In this work package the specifications and functional requirements will be defined both for novel gas and presence detectors for early fire detection and alerting and for personal safety monitors to be worn by workers and fire-fighters during rescue operations. In order to do so, the concepts for gas sensing, presence detection and personal gas monitoring against the provided requirements will be reviewed and down-selected. Another important output of this work package will be the overall system architecture, interfaces, communication protocols and common data format for the SAFESENS fire system.

Most gas sensor devices are based on a sensitive layer / material which changes its properties upon exposure to a particular gas. All detection principles investigated in this project require development of nanostructured novel layers and related deposition techniques. The following material and deposition combinations will be studied:

In addition, the metal oxide surfaces will be structured by a combination of e-beam lithography and RIE/ICP etching.
This work package requires an elaborative investigation in order to obtain the best chemical composition and nanostructure as well as proper processing on lab scale. The best materials/processes will be transferred to WP3 for integration on device level.

One of the disadvantages of the state-of-the-art sensor devices is its size and cost. Therefore, the driver of this work package will be the further miniaturization of several components which are key in the different types of sensors (e.g. gas sensors, aerosol/smoke sensors and presence detection sensors). The following concepts are part of this work package:

In addition, ultra-sensitive read-out circuitry will be developed for the various sensors in this project. To facilitate the miniaturization the primary focus will be on integrated read-out circuits, preferably on the same chip as the sensor element.

Assembly and packaging is a major step in the co-integration of sensors with their read-out electronics (which have been developed in WP2 and WP3). Unlike logic and memory chips that only require hermetic sealing and contact pins, packages for sensor devices do also need an opening to establish direct (i.e. gas or light) connection between the sensor and its environment.

The main objective of this work package is therefore to innovate at device assembly level by providing novel technologies in the field of MEMS packaging, open-cavity packaging, fan-out wafer-level packaging (FOWLP), board level assembly and wafer-level assembly. The output of this work package will be multisensor packages which combines either multiple gas sensor or gas sensors with localization sensors. They will include the sensing functionality, readout electronics, communication components and wireless TRX device for a safe, tamper proof system which withstands the rigors of infrastructure and mobile deployment.

The main goal of this work package is to investigate whether a combination of sensors can detect more than the sum of the separate sensors. In order to achieve this, both a measurement campaign (in close cooperation with WP6) and sensor fusion algorithms need to be developed. In addition, networking algorithms to facilitate occupancy and tracking based on multiple data streams will be developed as well.

The end results of this work package is a preferable wireless sensor system for early fire detection and a smart wrist band for firemen, keeping in mind a small footprint and low power consumption. In order to achieve this, hardware and software modules will be developed and integrated at system level. An integral part of this is to ensure the data security aspects.

Another activity is testing of the developed components from WP3/WP4 and WP6. The initial sensor tests will take place in special-dedicated climate chambers in which the concentration and flow of relevant gases can be varied. A further down-selection of sensors will undergo stability measurements in order to study the sensor characteristics regarding influence of environmental parameters (EN54) and in addition long term stability testing under influence of environmental parameters (temperature, Humidity, EMC, etc).

Once the demonstrators (building automation system for safety monitoring and the wearable gas monitor plus vital function monitoring) are completed (by WP6), they will be tested in real-life environment conducted or supported by the application partners and a feedback (validation) with the initial set requirements (by WP1) will be made.